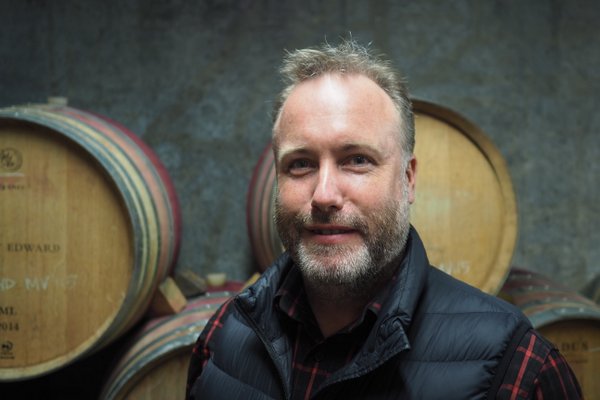 Prophet’s Rock is emerging as one of the star wineries of Central Otago. Widely travelled winemaker Paul Pujol is making some increasingly impressive wines from two neighbouring vineyards in Bendigo, the Home Vineyard and Rocky Point.

Paul has been at Prophet’s Rock since 2005. The vineyards were planted by Mike and Angela Mulvey in 1999/2000, and originally were located on either side of Lake Dunstan, with the home vineyard in Bendigo and a second vineyard in Pisa. When Prophet’s Rock was sold to a consortium in 2013, things were jiggled round a bit and now the Pisa vineyard is gone and the home vineyard has been joined by another, larger block a short distance away in Bendigo.

Paul began making wine with Seresin in Marlborough, and they gave him the winter off to go to France: his French connection was that he’d showed the guys from Henri Bourgeois around Marlborough when they were looking to get involved. He started off working in the Languedoc, then caught the vintage at Bourgeois in Chavignon, Sancerre, then he headed over to Alsace in October, where he worked at Kuentz-Bas. His initial plan was to head to the Hunter Valley for vintage there, which would have led to him completing five vintages in a calendar year, but instead things went well at Kuentz-Bas and he stopped there. He ended up being chief winemaker for three years (Paul’s father is French so he has a European Union passport). He was the first non-French chief winemaker in Alsace.

‘It was winemaking Disneyland,’ Paul recalls. ‘There were 12 different grape varieties and 30 different Grand Crus with lots of different soils. It was quite a unique insight for a new world wine person into how it all runs.’ One thing he became aware of was the paucity of clonal material in New Zealand for Pinot Gris. ‘We have rubbish clones in New Zealand. They don’t look the same, and they crop heavily.’

After this, Paul went to work in Oregon with Lemelson, and then returned to Prophets Rock. He revisited to Oregon in 2006, and then had a seminal stay in Burgundy in 2009 where he did vintage at Comte de Vogue in Chambolle. This was to have a big influence on the way he now works, and was the beginning of his fruitful collaboration with De Vogue winemaker Francois Millet. 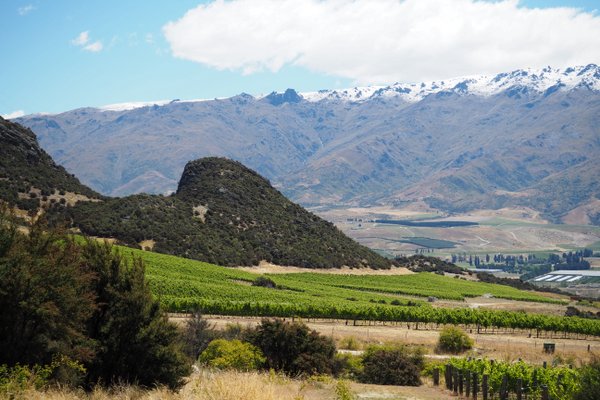 The Home Vineyard (7.5 hectares) is on the higher terrace in Bendigo. These are older soils, and have experienced more weathering, with some schist degraded to clay. The red-coloured top soil schist has quite a bit of iron and different bands of clay. In this semi-arid climate there has been some accumulation of limestone (pedogenic lime) where the calcium ions have not been rinsed through by rainfall and have been held up by the clay. This builds up a layer of pedogenic lime about a foot thick half a metre below the surface at one end of the vineyard, and 80-100 cm down at the other. It’s an interesting soil, and the clay and limestone elements hold on to water, which is handy. The back corner of the vineyard is at 400 metres, which is as high as you want to go in Central Otago. The vineyard was planted in 2000, so now has some decent vine age.

Rocky Point (17 hectares) is straight schist, with bits of clay. It was planted in 2005. Paul says that the clone difference are fading with vine age. ‘We used to get excited about clones when the vines were young.’

In an exciting development, Paul Pujol has been collaborating on a guest cuvée with François Millet of De Vogue in Burgundy. They first met when Paul worked a vintage there back in 2009. François has been making wine there since 1986, and for the guest wine, Paul wanted to encourage him to work his way, even to the point of buying in the equipment that De Vogue use in Burgundy. ‘He chose when to pick, and even dug out his tank the day before he flew out,’ says Paul. ‘He’s pretty old school.’ One of the different approaches Francois takes is his racking of barrels, where wine is transferred out of one barrel to another. ‘He racks out of the heads through a wooden bung during elevage, with a gentle hand pump,’ says Paul. ‘You can only do 12 barrels a day. He racks after malolactic: he’ll fine in barrel and then rack. He likes taking the fine lees by jacking up the barrel and then choosing which ones he wants. The elevage profile is quite different compared with typical NZ winemakers. There is very little extraction.’ 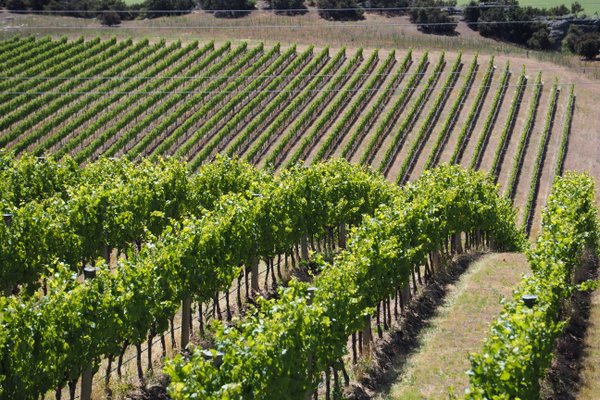 Since working with Francois in 2009, Paul says he has found himself moving in this direction, extracting less. ‘The more I stripped away, the wine seemed alive.’ In 2013 he did just one hand plunge for the whole fermentation. The lack of work during ferments at De Vogue surprised him. ‘In 2009 I was quite excited. I thought I would get to hand plunge the Musigny, but he said no that terroir is too mineral and it doesn’t support any extraction. Just keep the caps wet.’ Francois will mix the caps a couple of times with a gentle pumpover, but it’s not extractive: more a spraying over.

Francois doesn’t use stems, and Paul says that he’s also moved away from whole bunch. ‘When I first got into wine I found that character quite attractive, but I think that over time I’ve decided that stems taste like stems. You want to see the vineyard. Our site is quite high so our stems just weren’t right.’

‘You can pick stems on our site and they are bright green. If you chew them you gag.’ 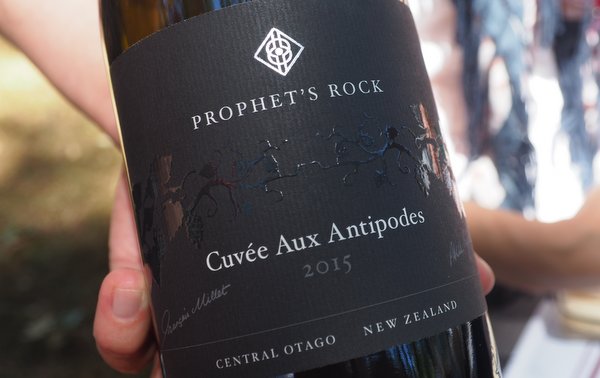 I quizzed him about picking decisions. ‘They are kind of everything; the most important to get right. We get our flavour ripeness at moderate to low alcohols.’ He adds: ‘In the new world we seem to be terrified of missing physiological ripeness. The tendency is to pick quite late compared with Burgundy. We seem to have more of an imbalance between sugar and ripeness. There seems to be a gap between sugar and physiological ripeness. You end up with high potential alcohol. There is style, too: plenty of people in the new world like big, dark Pinots. We track acidity, sugar and pH. This gives a broad window, then it’s really by taste.

‘Sometimes it’s harder to do less than more. Even the term “winemaking” implies doing something.’

One of Prophets Rock’s specialities is Pinot Gris, which Paul finds fascinating. ‘Here’s this variety that can be the least aromatic wine on the planet, through to some of the most opulent aromatic wines in the world. In Central Otago we are lucky: we are cool climate so Gris can stay on the vine long enough to go to an aromatic spectrum of flavours retaining freshness and acidity.’ He says that one of the challenges in New Zealand is the clones, which want to crop heavily with big bunches. He uses wild ferment, old barrels and full lees with his Pinot Gris. 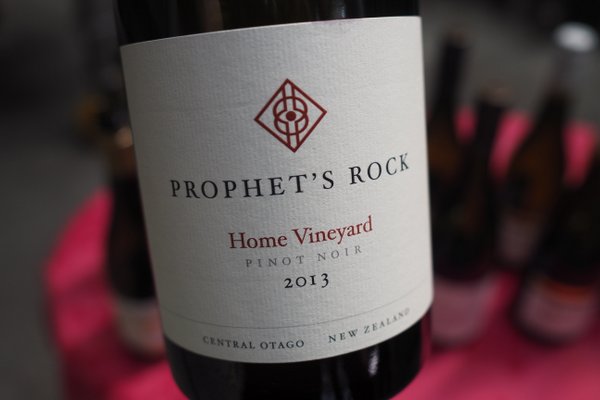 Prophet’s Rock Home Vineyard Pinot Noir 2013 Central Otago, New Zealand
There’s much less extraction this year, a new direction that Paul Pujol is taking. Beautifully aromatic, this is savoury and textural with spice and minerals, as well as nice red cherry fruit. Good acidity with some raspberry freshness. Nice concentration and grip, yet also silky and fine: this is superb. 95/100 (07/17)

Prophet’s Rock Home Vineyard Pinot Noir 2013 Central Otago, New Zealand
Paul Pujol made five small tanks of this wine. One got no pumpovers or plunging, and had no stems. The rest got one hand plunge, and were in tank for 28-32 days, and again, no stems were used. Lovely aromatics: fresh red cherries, fine herbs, a touch of cedar. The palate is structured and quite firm with good tannins and lovely purity. Very fresh with a bit of tannic bite under the sweet fruit. Lovely focus to this wine. 95/100 (01/17) 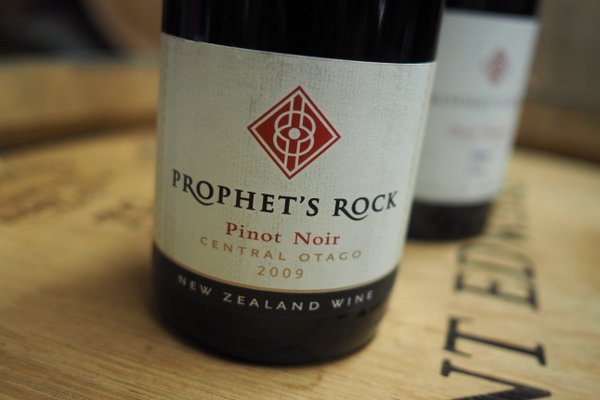 Prophet’s Rock Home Vineyard Pinot Noir 2009 Central Otago, New Zealand
Paul Pujol says this was a very cool year with a cold February, resulting in lighter coloured wines. The challenge was not to respond to the little extraction of colour in the ferment by working it harder. The result of his restraint is a beautiful pale Pinot that is ageing fabulously. Fine red cherries with some dried herbs and good structure and acid here. 94/100 (02/17)

Prophet’s Rock Home Vineyard Pinot Noir 2007 Central Otago, New Zealand
This was the traumatizing vintage of Paul Pujol’s life: there was snow in the vineyard around flowering. Warm, a bit savoury and textured with nice smoothness and good acidity. Some fine, spicy notes, and hints of mint and medicine, as well as dried herbs. 93/100 (02/16)

Prophet’s Rock Pinot Gris 2015 Central Otago, New Zealand
Lovely nutty, spicy, pear and peach notes adding interest to the grape and citrus fruit. There’s a tightness on the finish but also some lovely depth on the mid-palate. So attractive with a serious side. 92/100 (02/17)

Prophet’s Rock Pinot Gris 2010 Central Otago, New Zealand
Quite floral and grapey with some spice, mango and toast on the nose. Fresh, supple palate with a hint of tinned pea in the background, and lovely tangerine, grape and spice notes. Lovely textural wine. 93/100 (02/16)

Prophet’s Rock Cuvée Aux Antipodes 2017 Central Otago, New Zealand
Gravelly, slightly chalky edge to the brooding, sweet black fruits. Lovely concentration and intensity here: sweetly fruited with dense blackberry and black cherry with a slight reductive edge. There’s astonishing volume and amplitude here, with good structure and acidity. Still so primary with amazing fruit, structure and acidity. Grippy tannins but they work so well in the context of the wine. Such a drive and energy here. 96/100 (01/19)

Prophet’s Rock Cuvée Aux Antipodes Blanc 2018 (barrel sample)
Chardonnay from a leased hectare of vines in Pisa, which were planted in 2004. They took it over in 2017, and in 2018 took a crop after letting it come back for a year. 6 barrels made, one new, and the oak is from Troncais, which Francois says is very interesting for Chardonnay. Racked post malo in the same way he racks the Pinot Noir by hand from a low racking bung with the fine lees. Lovely concentration and precision this wine with meal, bread and citrus, with some peachy richness. Lively and intense with good acidity. Has depth of fruit with the oak in the background. Lovely concentration and intensity here: serious effort. ‘The acidity is not too obvious: it is there to give the freshness, but it doesn’t have too much strength,’ says François. ‘There is respect between the freshness and the fruit, and there is no heaviness.’ 94-95/100 (01/19) 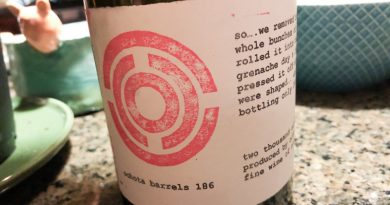 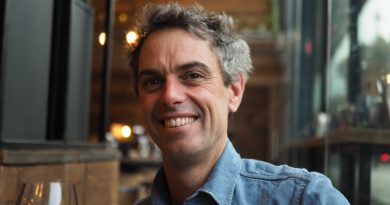 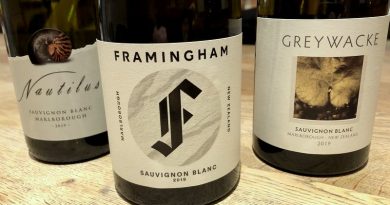 In Georgia, on the qvevri trail, experiencing the living fossil of wine