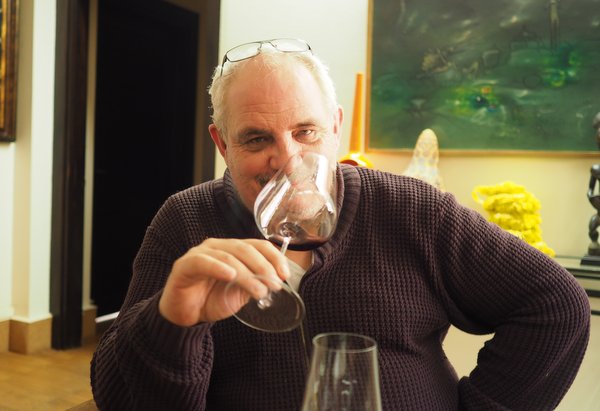 Every region has its superstar producers. Beaujolais has the gang of five natural winemakers, but now there’s a new star who threatens to overshadow them all. It’s Fabien Duperry of Domaine Jules Desjourneys, who is making world class wines from privileged sites in Beaujolais (Gamay) and the Mâconnais. Having heard a lot about him, I was thrilled to visit, even though it was Sunday morning, and Chrissy and I were nursing slightly muggy heads after a big night out in Villié Morgon that featured some of the usual geek bottles of Beaujolais. We turn up for our appointment with Fabien at 9 am, in La Chapelle de Guinchay, and there’s the usual uncertainty of where we’re supposed to meet. He looks like he’s had a big night too, and I can sense him slightly regretting to agreeing to the appointment.

We head through a large courtyard into a room with lots of art, and a table laid with Zalto glasses. This is beginning to look a bit more promising. We start the appointment in French, but after 10 minutes he begins to speak in perfectly good English. As we taste together, the atmosphere warms.

Fabien Duperray is a Beaujolais newcomer. He hails from Burgundy, where, as a merchant, he’s been flogging the top stuff for years. Controlling the allocations of the leading domaines such as DRC and Coche is a nice place to play in the market. His move to Beaujolais isn’t in order to make his fortune, but because at the age of 43 (he’s now 54) he wanted to be a winegrower. ‘I don’t do it to make money; it’s my pleasure,’ he says. Domaine Jules Desjourneys now consists of 7 hectares of Gamay in Fleurie and Moulin-Ã -Vent, plus 10 hectares of white vineyards that he shares with another winegrower in the MÃ¢connais. He made his first wines in 2006, when his production was just 500 magums of each wine, bottles that he hasn’t started to sell yet. He pours the wines and talks.

Fabien believes that the fermentation process is the most important element of wine. ‘Jules Chauvet worked all his life on fermentation,’ he says. ‘For me it is the most important bit in the cellar. I need the best fruit, but I need to control the fermentation to have complex aromas. With elevage you can’t change things.’ But he’s also a believer in time. Patience is needed to make great wine, and he gives his wines lots of time. He’s moved away from barrels, too. The wines are now matured in a mix of concrete tanks and glass. 2014 was the last year he used barrels, and then just for half of his wine.

What about stems and sulfites, usually topics of conversation in the region? He’s changed the proportion of stems. In the past it used to be 100%, but he’s moved back a little and this year used 30%, but this will depend on the vintage. ‘It’s nice to make wines you can keep for 50 years, but it is also nice to make wines easier for the consumer,’ he says. ‘In the future it will be easier to meet my wine early, but you will still be able to keep it.’ And sulfites? ‘When fermentation is carried out properly it doesn’t need any SO2,’ says Fabien. He usually adds it in the second year, letting the aromas develop and then stabilizing them with SO2. 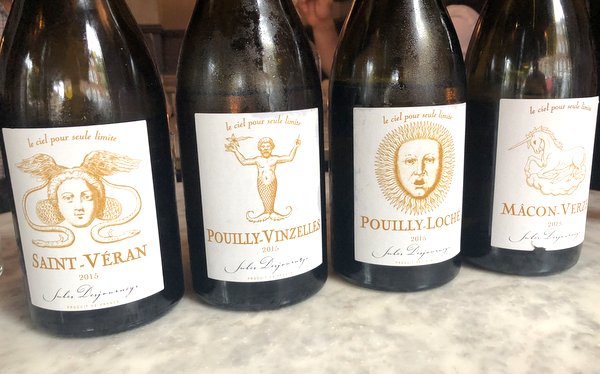 Like many in the region, he’s experienced two short vintages because of hail. But despite the decreased quantities in 2017, he’s very happy with the quality. Duperray sees the Beaujolais crus in analogy to Burgundy. For him, the Cotes de Nuits is Morgon, Fleurie and Moulin-a-Vent, then he sees Brouilly and Cotes de Brouilly as the Cotes de Beaune. He rates Fleurie and Moulin as Beaujolais’ best terroirs, followed closely by Morgon.

We try the ‘Last Judgement’ Chenas 2017. It’s deeply coloured, seductive has incredible depth, and I’m blown away by it, but he thinks there is a touch of rusticity here when compared with his other wines. I don’t understand what he means, that is until we taste the next wine. The Morgon 2017 is also deeply coloured and thrilling, with intensity and precision, with hints of blood and meat in the background. What a wine! Then the Fleurie Les Moriers 2017, which in this vintage was just 1000 litres from four hectares, and will just be made in magnum. This shows concentration, freshness and elegance combined. Then the last of the 2017s is the Moulin-a-Vent ‘Styx’, which this year is a blend of vineyards because of small quantities. Elegant and floral, this has such refined structure and is quite beautiful.

Duperray believes in Beaujolais, and he thinks you can keep his wines for 25 years. ‘In the past, people kept Beaujolais, but the big merchants decided you have to drink it young like Nouveau,’ he says. ‘But it’s a normal wine like Cote-Rotie.’ He tells the story of trying the Leroy Grands Echezeaux 1964 and the Chanson Fleurie 1964 blind with a famous French critic, who got them the wrong way round. Duperray has tried a lot of 1928, 1929 and 1934 Beuajolais that have aged well.

Duperray pays 2 Euros for his corks. ‘The cork is essential for the life of the wine.’ 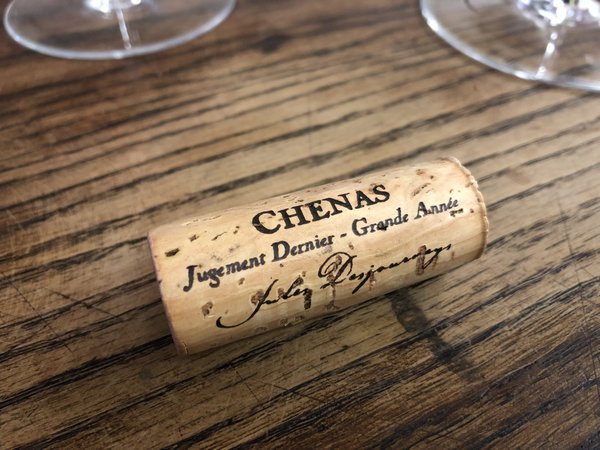 We had a look at some bottled wines. Chenas 2015 has the trademark Desjourneys density, but it’s not at all heavy or clumsy, showing lovely beauty and poise. Moulin-a-Vent 2015 has incredible freshness and concentration, together with finesse and refined tannins. It’s still a little reductive and will keep for a long time. It’s hard to overstate how good these wines are. We’re quite blown away by them. This is everything you could want from Gamay.

And then there are the whites, from the Mâconnais (I tasted these later at Noble Rot with Keeling and Andrew, the importers in the UK, but I’ve threaded them in here). The 2015s, now in bottle, are quite special. The Mâcon-Verzé is intensely aromatic with ripe pear, peach and citrus on the nose, as well as a fine spiciness, showing power and complexity, and a stony, mineral edge to the fruit. The Saint-Veran is also intense, but has a little more finesse and just a bit of fleshiness, as well as amazing focused acidity. The Pouilly-Loche carries on with the same theme of intensity allied to freshness, and adds some creamy richness, too. But this is also steely and alive. And the Pouilly-Vinzelles is perhaps finest of all, with concentrated fruit, a distinct spicy mineral dimension, and lots of complexity. It’s a remarkable set of wines, redefining my sense of what the MÃ¢connais is capable of.

We finish tasting, and Fabien talks about his art. There’s a self-portrait on the wall. He asks me if I know who it is. English artist, he says. I get it right: Hockney. Phew! We wander through a few rooms and he points out specific works. He’s pretty international in his tastes, and has accumulated around 1000 pieces now.

It’s hard to overstate how good these wines are, and how they transcend our expectations of their appellations.

Jules Desjourneys Morgon Les Corcelletes and Mecouds 2017 (cask sample)
Incredible density here. Deeply coloured with floral aromas of blackberry and blackcurrant. Lovely precision and elegance on the palate with great concentration, lovely tannins and acidity, but the tannins are a bit more sophisticated than with the Chenas. Astonishing freshness with a hint of blood and meat in the background. Such impressive fruit quality. 95-96/100

Jules Desjourneys Fleurie Les Moriers 2017 (cask sample)
10 hl off 4 ha of vines this year, so he will just make magnums. So floral and expressive. Fresh with amazing precision, showing such concentration but also freshness and elegance. Supple, refined and fine. 95-96/100

Jules Desjourneys Chénas 2015
‘This was a special vintage,’ says Duperray. ‘I put the grapes in the vat and did nothing. 10 days later I put them in the press. I didn’t try to extract anything, just preserve the freshness.’ Lovely density here. It has good concentration with fresh black cherries and blackberries. This wine has a supple personality but also plenty of structure and freshness. It has a hint of reduction. Great concentration and refinement. 94/100

Jules Desjourneys Moulin-à-Vent 2015
‘Granite is special,’ says Duperray. ‘When I try this wine I believe it is Hermitage.’ So concentrated but with freshness and detail. Such incredible freshness and concentration with a stony mineral undercurrent. Very fine and expressive, and still a little reductive. Complex and unfurled with firm but refined tannins. 96/100

Jules Desjourneys Beaujolais Blanc 2016
From granitic soils, Complex, vivid and lively with a distinct lemony drive and good acidity, as well as some nice texture. So mineral and intense with some richness behind the citrus fruit. Shows lovely intensity. No wood here. 93/100

Jules Desjourneys Mâcon-Verzé 2015
Intensely aromatic with ripe pear, peach and citrus on the nose, as well as a fine spiciness. This has amazing concentration allied to freshness. Powerful and complex with a stony, mineral edge to the grapefruit, pear and pineapple fruit. There’s a lot of intensity here, and a sort of crunchy, mineral, crystalline fruit quality. So intense with some crunchy structure. 93/100

Jules Desjourneys Saint-Véran 2015
This is really interesting: there’s intensity here, but also lovely purity. Lemony with some grapefruit characters and a hint of fleshiness. It’s a bit stony, too. There’s amazing, focused acidity here. Such lovely focus and minerality here. 94/100

Jules Desjourneys Pouilly-Loché 2015
Again, this has real intensity, with just a hint of creaminess and lovely pear, white peach and pineapple fruit. It’s steely and alive with nice citrus and pear. Lemony and vivid with keen acidity. Such a lovely, bright, delicate wine. 93/100

Jules Desjourneys Pouilly-Vinzelles 2015
This is minerally and spicy with real intensity. There’s a hint of matchstick reduction with real intensity to the citrus and pear fruit. Very mineral and expressive with purity and focus. Such an expressive, pure, detailed, complex wine. 95/100 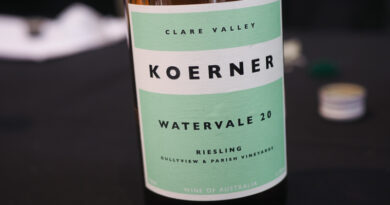 Koerner: a new producer from the Clare Valley now making some of Australia’s most exciting wines 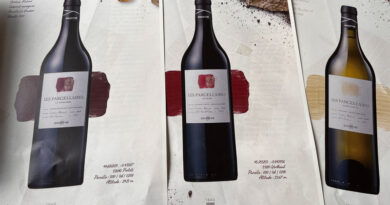 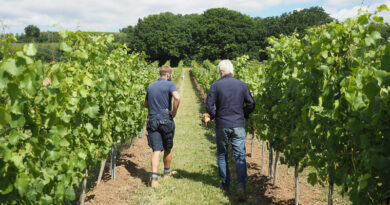