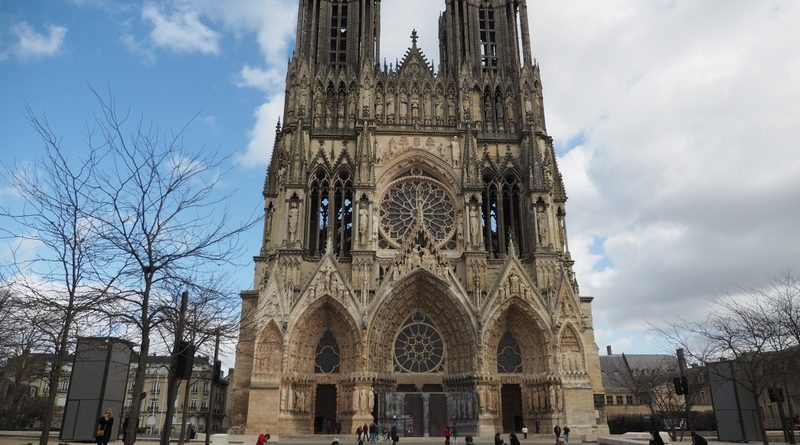 In March 2019 Ring and Goode visited Champagne, to taste, visit and taste some more. In the recent past, the big story in the region has been the rise of grower champagnes. The new story, however, is that many of the top growers are quietly becoming négociants. And some of the houses are behaving more like growers.

The shift from grower champagne to neo-négociant

Grower champagnes – made by the darling indie producers coveted by wine geeks and somms the world over – are on a steady decline. That is, grower champagne as we’ve known it. In its place, we’re seeing the rise of small, independent neo-négociant houses, where successful growers, previously held strictly to their own land holdings (save for a 5% grace), are using fruit from neighbours, even family members, so they can produce enough wines to satisfy growing demand. Or we’re seeing the less successful growers abandon the dream of making wine altogether, instead turning to more profitable gains in grape growing, or real estate. The loss of grower champagne producers started with a trickle, and turned to a rapid stream in 2018. We’ve been closely tracking grower champagne for years, and here is what we’re seeing.

Lay of the land

In Champagne there are approximately 15 800 growers, 140 cooperatives, and 320 classic champagne houses. Those champagne houses sell up to 70% of the wine, but only own about 10% of the land. That means that the growers are in control of 90% of the vineyard land in the region (Champagne has 34 400 hectares of vines). However, most grower’s holdings are tiny: the average grower owns only 2.05 hectares. Land in the region is expensive, largely because it is lucrative: grapes sell for high prices and the vineyards yield well. In 2018, land in the region that couldn’t be turned into vineyard was selling for €1800-€5000/hectare, while vineyard land was reaching up to €2.5m/ha.

‘It is the new philosophy of Champagne Savart, Vilmart, Bérêche, Jerome Prevost and Emmanuel Brochet. RM is finished. It’s now NM….If I want a hectare in Le Mesnil sur Oger, it is €2 million. It is very expensive. I prefer to buy the grapes.’

Of the 15 800 growers, fewer than 5000 make their own wine, and more than half of those wines are Récoltant-Coopérateur (RC), meaning the growers take their grapes or base wines to a co-op wine facility (like a crush pad) and have the champagnes made specifically for them. That leaves only approximately 2000 producers who actually grow, and produce, their own wine. These are the true grower champagnes, the Récoltant-Manipulant (RM). It’s exactly the same estate system as for any other wine region in France, or Italy, or Argentina: producers growing, and making their own wines. Confusingly, the Syndicat Général des Vignerons de la Champagne (SGV) lumps RM and RC together, skewing the statistics of grower champagne producers and production.

Every bottle of champagne produced needs have an identifying 2 letter code on the label, somewhere. Often these are in minuscule font, tucked away. But it’s a great language to unlock, once you remember this key:

NM Négociant-Manipulant producers that bottle and market champagne using grapes purchased from other growers. This is where the large Champagne houses fit in.

CM Coopérative-Manipulant is a co-operative of growers who blend the product of their collective vineyards to sell under one or more brands.

SR Société de Récoltants is a registered firm set up by two or more growers who share the same winery which they use to make wine to sell under their own label. This designation differs from a CM in that the growers almost always have significant involvement in the winemaking process.

MA Marque d’acheteur is a buyer’s own brand, as for a supermarket, for example.

ND: Négociant distributeur. A wine merchant selling under their own name

RM Récoltant-Manipulant. This means the producer grows and makes Champagne from their own vines (minimum 95%). Translates as “Grower Makers”

RC Récoltant-Coopérateur is a wine sourced from a single grower but made entirely for them by a co-operative winemaking facility.

Data reported by the SGV

As you can see, in 2018, grower champagne lost 120 producers. The reasons are myriad, and interwoven, but the bottom line is simple: economic survival. The average RM (true grower champagne) produces 18 000 bottles/ year. That’s hardly enough to survive on, especially considering the high production costs and ageing requirements. Most growers offset costs by selling off fruit. In 2017, Grand Cru fruit was selling at €6.68 per kilo, with bonuses for growers lofting the price to near €10.00 per kilo. Let’s do some maths. If you’re selling 1 hectare of fruit from your 5 hectare estate, say for €6 per kilo, and cropping at 12 000 kilos/hectare, you’re earning around €72 000. That’s likely to be more profitable than making your own wine, unless you are achieving very good prices.

Even more tempting for some, is selling off the real estate completely. Farming on the fringe is incredibly hard work, especially in light of recent challenging vintages in Champagne. There is no shortage of large houses waiting to swoop in and scoop up vineyard land. There is currently what Bruno Paillard describes as a ‘Champagne War’ where the larger houses are all fighting it out for more vineyards. That 5 hectare plot of vines, selling for €1.5 million/hectare, can uproot and redirect an entire family tree.

The current global economics for champagne sales isn’t helping either. Overall, sales of champagne were down slightly in 2018, at around 300 million bottles, a downwards trend since 2015. The most depressed markets are traditionally the two most robust: France and the UK. Together they absorb 58% of all champagne sales, but were 4% down last year. Brexit uncertainty most definitely plays a part in the UK decline, as does a highly competitive sparkling retail arena, including the hometown heroes, English sparkling wines.

The French domestic market drop is more worrisome, as it’s always been the main channel for grower champagne sales. For the vast majority of RMs, the cost of export is far too prohibitive, and they rely entirely on their national market. The government’s increasing anti-alcohol health warnings, and tightened impaired driving penalties could be resulting in locals drinking and purchasing less. Perhaps the recent trend towards non-dosé/extra-brut styles, seen as en vogue internationally, isn’t striking the same chord with French traditionalists.

Supermarkets account for 33% of bottles sold in France in 2018, and Champagne volumes have declined by 6.6% in this important sector. One positive is that shoppers, when they are buying, are buying up. In hypermarkets and supermarkets, champagnes positioned at less than €12 experienced a decline of 18% and lost one percentage point in terms of market share by volume. Bottles priced above €20 now account for over half the total volume sold (51%). Champagnes positioned at over €30 increased by 11%, achieving 9% of the market share by volume.

So what’s a successful RM to do? If your wine is selling out and you want to make more wine, you need to either buy more vineyards, or purchase fruit. Even if the right vineyards were for sale, buying them is out of reach for most growers. So, they opt to lease vineyards or purchase fruit, which will cost your RM status, but according to some established growers that we met with, the letters have become moot.

For Raphaël and Vincent Bérêche, brothers and fifth generation producers overseeing their 9.5 ha estate Champagne Bérêche et Fils, those letters and that status were important to keep. They decided to open an entirely new winery as a négotiant operation, allowing them to produce champagnes from purchased fruit. They named it Raphaël & Vincent Bérêche (or R&V Bérêche for short). For the brothers, they weren’t wanting to produce more of each wine, but rather have the freedom to supplement their family range with grapes from other villages, and styles outside their house.

For Fréderic Savart, the economics of remaining an RM didn’t make sense. His Écueil domaine is 4 hectares, and he buys grapes from a further 2 hectares. ‘It is the new philosophy of Champagne Savart, Vilmart, Bérêche, Jerome Prevost and Emmanuel Brochet,’ says Savart. ‘RM is finished. It’s now NM. I like Burgundy and I have many friends in Burgundy, both domaine and négoce. In the last five years it has been very interesting, because it is very expensive. If I want a hectare in Le Mesnil sur Oger, it is €2 million. It is very expensive. I prefer to buy the grapes.’

In an interesting parallel, we also have the large houses behaving more like growers. Roederer are a very well known house, but past the NV, they’re effectively a grower. ‘We have a special way of looking at our vineyards,’ says Chef de Cafe Jean-Baptiste Lécaillon. And 242 hectares is a lot to look at. This is more than 70% of their needs, and all the Roederer vintage wines are 100% estate grown. ‘We are a grower,’ says Lecaillon. ‘When you taste Vintage Roederer – Cristal, Cristal Rosé, Blanc de Blancs, Vintage, or Vintage Rosé – we are a grower.’ It’s only for the NV Brut Premier that they buy grapes. ‘We buy mainly Meunier, because our vineyards are mainly located in Grand Cru or Premier Cru, and as you know these are mostly Pinot Noir and Chardonnay,’ says Lecaillon.

Over the next few weeks we’ll be profiling some of the most interesting producers in the region, including forward-thinking larger houses, growers, and neo-négociants. 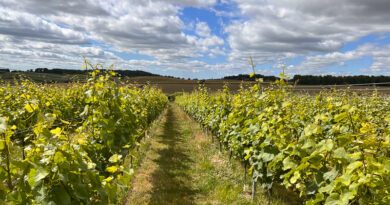 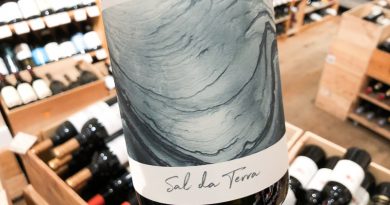 Sal da Terra, in search of the perfect Albariño 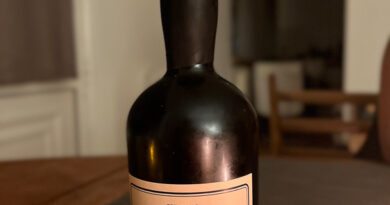