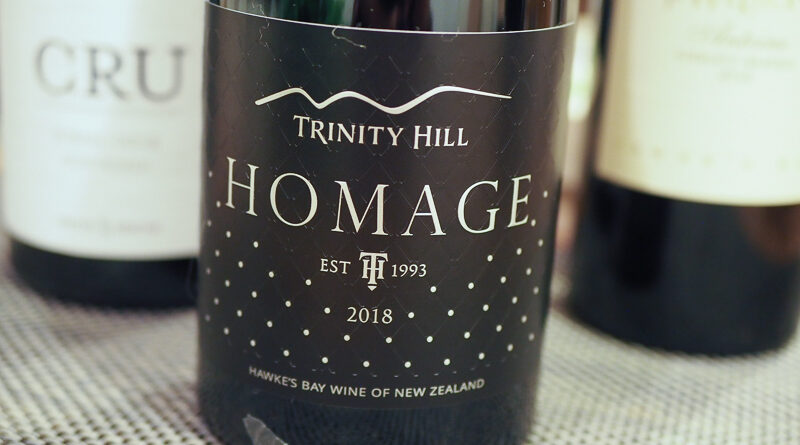 Andrew Caillard, ex-pat Brit and now an Aussie, working for Langtons auction house, has a nice gig. Every year he gets to choose a case of 12 wines that he thinks best represents the red wines from Hawke’s Bay’s feted Gimblett Gravels district. This selection, of the 2018 vintage, is the 11th iteration of this annual selection.

The 2018 vintage was a warm one (1767 degree days, as opposed to the long-term average of 1520). It was the hottest summer since records began in the 1930s. Rainfall was normal at 555 mm (irrigation is the norm on the gravels as they are so free draining). The big challenge, though, was harvest rainfall, and it was very humid at the back end of the season. ‘It was a warm season,’ says Warren Gibson, who is one of the region’s top winemakers (Trinity Hill and also his own label, Bilancia). ‘I get a little wary of the warm early seasons. In 2018 we saw a warm early season and we got some rain in early March. Then the rest of March was quite humid: not wet, but humid. Merlot in particular didn’t like it at all.’

‘We got to the 1st April and went into the autumn phase, and disease pressure dropped and we could pick at the perfect time. It was a vintage of two halves.’ He says that 2018 is a good season, but 2019 and 2020 are better, describing them as fantastic.

I have a soft spot for the Gimblett Gravels. I visited on my first trip to New Zealand in 2007, and was taken aback by the distinctive terroir. In the past, it was a real challenge growing Bordeaux red varieties and Syrah and New Zealand, so the combination of warmth and late growing season water stress really helped. Now, with a little more warmth in many seasons, it needs to be managed a bit: the danger is wines with slightly dry and bitter tannins that come from heat and drought stress.

800 hectares of vines are found on the Gimblett Gravels, which is a really interesting terroir – and a new one. 160 years ago, this was where the Ngaruroro River flowed, and deposited all the gravels that were then exposed after a huge flood in 1867. But it’s not a totally uniform terroir. ‘Even within the gavels there are a range of soil types and temperature,’ says Gibson. ‘Nearer the river we have bigger stones and less silt. It’s probably 2 or 3 degrees warmer. As you towards the sea, it is much more silty and cooler.’

It’s also a new region. The first vines were planted here by CJ Pask in 1981. But things only really got going in the early 1990s. And then everything moved quickly from there when people realized how good a terroir this was for reds. Prior to 1991 there were only 20 ha of grapes here. It grew to 200 ha by 1997, and then to its current size.

Gimblett Gravels isn’t a PDO or geographical indicator: it’s more of a trademark, and the Gimblett Gravels association was set up in 2001 to coordinate producers, who pay a fee to use the name and have to have 95% of gravels grapes in each bottle.

Leafroll virus has been an issue in the gravels. This is a really big problem when you are struggling for ripeness anyway, and so a program was put in place to eliminate it. A survey showed that 75 hectares in the region had more than 25% of vines affected by grapevine leafroll virus. Rogueing (pulling out vines with virus) was implemented, and by 2015 only 7.5 hectares had this level of infection.

Reds dominate here, with 90% of the area planted to them. 35% of plantings are Merlot, Syrah is 20% and Cabernet Sauvignon is 15%.

‘I think it is Cabernet family and Syrah country,’ says Warren Gibson. ‘The strength of Cabernet and Cabernet Franc (which is underplanted in my opinion) have led to a wave of opinion that any replanting would be much more to the Cabernet family versus Merlot, and Syrah (as the other smart option).’ He adds that Syrah from Hawke’s Bay has its own stamp of personality and sense of place, while Cabernet is very good but less regionally distinctive. ‘I think let’s not beat up on Merlot, but on gravel it is not necessarily the classical match.’

Elephant Hill Hieronymus 2018 Gimblett Gravels, Hawke’s Bay, New Zealand
13.9% alcohol. 58% Cabernet Sauvignon, 22% Merlot, 19% Cabernet Franc, 1% Malbec. 22 months in French oak (70% new). This is dense, rich and concentrated, with ripe blackcurrant fruit, some blackcurrant bud, fresh black cherries, lots of spice (even some pepper), a touch of tar, and some oak character. Primary and still unformed, this is a rich, bold wine with a long future ahead of it. It’s a bit clunky right now, but shows massive concentration. Give it 10? 92/100

Mission Estate Jewelstone Antoine 2018 Gimblett Gravels, Hawke’s Bay, New Zealand
13.5% alcohol. 84% Cabernet Sauvignon, 10% Cabernet Franc, 6% Merlot. 12 months in French oak, half new. This has gorgeous aromatics with a savoury, spicy edge to the sweet blackcurrant fruit, showing great balance on the palate, with some sweet fruit, but also gravelly grip and lots of complex savoury character. Beautifully poised with potential for development, but you can also get stuck in now. Very fine. 95/100

Saint Clair Pioneer Block Cabernet Merlot 2018 Gimblett Gravels, Hawke’s Bay, New Zealand
13.5% alcohol. 55% Cabernet Sauvignon, 41% Merlot, 4% Malbec. 10 months in oak, 35% new. This is sleek and appealing, with a green note as well as sweet blackcurrant fruit. There’s some sweetness to the palate, which is accessible and quite pretty, with some notes of ginger and roast coffee. Very appealing with sweet fruit the key message. 91/100

Trinity Hill The Gimblett 2018 Gimblett Gravels, Hawke’s Bay, New Zealand
13.5% alcohol. 50% Cabernet Sauvignon, 50% Cabernet Franc. 100% new oak. Concentrated and dense but still with freshness. There’s oak here for sure: a grainy, spicy, woody undercurrent to the fruit. But it integrates reasonably well with the sleek fruit. Quite a modern, polished wine with impressive credentials but it does need time to develop some personality. 92/100

Villa Maria Ngakirikiri 2018 Gimblett Gravels, Hawke’s Bay, New Zealand
13.5% alcohol. 90% Cabernet Sauvignon, 8% Merlot, 2% Cabernet Franc. 20 months in French oak (60% new). Really complex nose, with blackcurrant the main driver, as well as some cedar spice and a touch of oil paint, and some subtle mint. The palate is concentrated, primary and structured with some savoury, spicy woody character under the fruit, and nice density and grip. A serious, structured effort of real appeal, but it needs time for the oak to integrate. 94/100

Elephant Hill Stone Syrah 2018 Gimblett Gravels, Hawke’s Bay, New Zealand
13.8% alcohol. 99% Syrah, 1% Viognier. 21 months in French oak (50% new). This is ripe and luscious, but also has a nicely savoury edge. Shows black pepper, blackberry and liqourice, with some hints of cured meat and mint. The palate is fresh and luscious with nice precision allied to ripeness. Quite a structured wine with nice grip. A polished, modern wine, but a good one. 93/100

Smith & Sheth CRU Heretaunga Syrah 2018 Gimblett Gravels, Hawke’s Bay, New Zealand
12.5% alcohol. 11 months in French oak (35% new). This is quite taut and savoury with some olive and spice notes, a touch of black pepper, and some woody hints. It’s a little tarry and reductive with some grip on the finish. Very primary and taut, and needs time to meld into something more harmonious and composed. But there’s a load of potential here, and it’s a delicious wine that could get even better. 93/100

Stonecroft Gimblett Gravels Reserve Syrah 2018 Gimblett Gravels, Hawke’s Bay, New Zealand
13% alcohol. 18 months in French oak (30% new). This is really appealing with a lushness to the fresh, vibrantly peppery black cherry and blackberry fruit. Open, rounded and floral, this is very pretty, and it has some substance, too. There’s just a touch of oak, but it works really well. 93/100

Trinity Hill Homage Syrah 2018 Gimblett Gravels, Hawke’s Bay, New Zealand
13% alcohol. Very fine and expressive with a lovely peppery flourish and concentrated, sleek black cherry, blackberry and iron, blood and mineral notes. Beautifully aromatic. This is quite serious with a lovely savoury dimension, and powerful but nuanced black fruits. Serious stuff, with perhaps its only weakness a slight mid-palate vacuum, although it’s hard to fault. A thrilling, mid-weight expression of 95/100

Vidal Legacy Syrah 2018 Gimblett Gravels, Hawke’s Bay, New Zealand
12.5% alcohol. 97% Syrah, 3% Viognier. 20 months in French oak (49% new). Brambly and rich with lovely black cherry aromatics, as well as some cedar spice. The palate is supple with some green framing to the well proportioned berry fruits, showing nice presence and brightness. Supple and open, with a real ease to it. 92/100 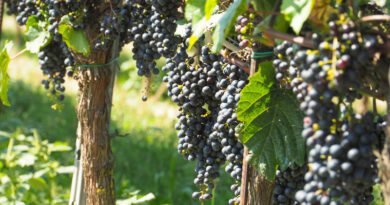 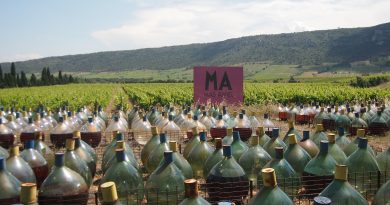 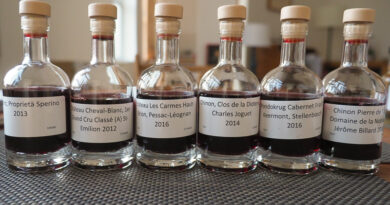