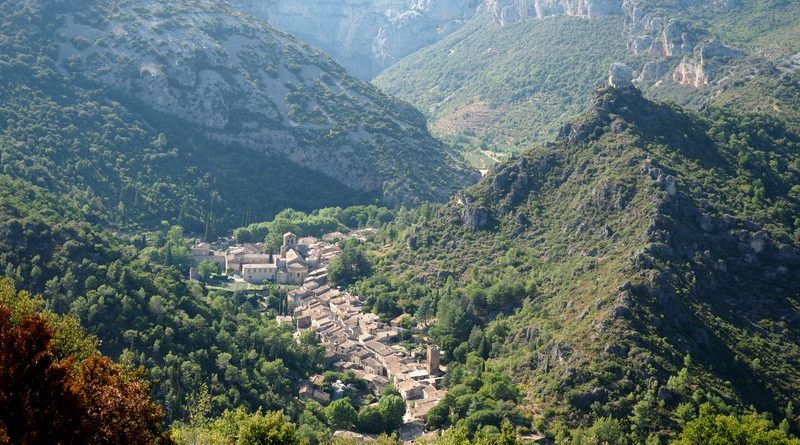 Jamie Goode visits the spectacular Terrasses du Larzac where he catches up with Xavier Peyraud and Géraldine Combes at their high-achieving Domaine, Mas des Brousses.

This was one of the great discoveries of my Languedoc visit. It was also a chance to catch some of the natural beauty of the region, with a short detour and hike to a stunning lookout spot – more on that later.

A short film of the visit:

I was heading to the village of Puéchabon in the highly regarded Terrasses de Larzac, to visit Mas Des Brousses. We began by meeting Xavier Peyraud, who married into a domaine that has been in the family of his wife – Géraldine Combes – since 1525. He took us for a drive, talking as he headed off road into the hills.

‘I started the estate in 1997, together with my wife,’ he explained. ‘The domaine belonged to my wife’s family for 15 generations.’ The village’s expertise lay in cutting trees and making charcoal, and made good money. Then, at the start of the last century they began planting vines. ‘My father in law began making wine in the cellar near the church in the village,’ says Peyraud. ‘He made some wine and the grapes were sold to the cooperative in Aniane. But this closed.’ He carried on working with two further coops, but then Payraud came along with some ambition to make something of the domaine.

‘I came from Bandol, in Provence,’ he explains [he doesn’t tell us, but he’s actually the grandson of Lucien Peyraud of Tempier fame]. ‘So we started to plant Mourvèdre when we arrived, and now the vines are 20 years old, so it’s OK for the quality. This is a massale selection from Domaine Tempier.’

‘This is a very good place for Mourvèdre: there is a lot of sun, and water in the soil. Mourvèdre doesn’t like dryness. If you are near the sea it is OK – you can keep the humidity in the leaves – but if you are far from the sea you need to have water in the soil.’

They have just under 10 hectares of vines. ‘I want to manage and control everything with my wife. We are only two people to do everything, so we can’t have more than 10 hectares. Most of the vineyards are Terrasses du Larzac AOC. They only have one vineyard in IGP, in Saint-Guilhem-Le-Désert, which is Merlot.

When he arrived they began bottling under the Domaine name, ‘but only the bottles we knew we could sell.’ The rest of the grapes were left in the cooperative. ‘Now we take all the grapes.’

They began by selling to the French market. Then at the beginning of 2005 we started selling wine in the USA and UK. ‘Now we sell 60% of production in the USA. In the east they use Polaner and in the west it is Beaune Imports in LA and San Francisco.’

We drive some more, on an unmade road, in the afternoon heat. ‘You are going to understand the freshness of the Terrasses du Larzac when you see the landscape,’ Peyraud tells us. ‘There are fresh winds that come from the hill during the summer. When it is 40 C at night, it is often 15 C during the day. The range between the night and the day gives to the grapes concentration and freshness.’

We head up into the hills, and pass a second village, Lavène. ‘But there is only one family left here now, and most of the houses are in a state of decay.’ We’re at 500 metres.

We stop at Montcalmes. ‘It was an old village totally lost, but a Belgian man came and rebuilt it,’ says Peyraud. He didn’t ask for permission. ‘They used to have goat’s cheese here, keeping the cheese in the cellar. But the houses got broken.’

Eventually we come out to the end of a trail. We get out and walk, and soon are rewarded with the most amazing view across to Saint Guilhem-Le-Désert, across a wild-looking canyon. It’s quite spectacular on this warm August afternoon.

On the way back to the domaine, we stop at the 12th century church – the Eglise de Saint Sylvestre-des-Brousses. It’s quite beautiful. Think what this simple, solid building has lived through!

We stop in the vineyards. The younger (20 years) lower block is Mourvèdre, while the older, upper block is old vine Syrah: this is on stony, alluvial soils.

Back at the domaine we meet Géraldine, and taste with the two of them. Production is around 32 000 bottles each year from the 10 hectares.

Mas des Brousses Blanc 2018 Saint Guilhem-Le-Désert, France
11 different varieties, co-planted in the same area. The main ones are Chardonnay, Sauvignon Blanc, Chenin and Viognier, plus seven others. Picked 15 August. Cofermented with no added sulphites. This is rich and vibrant with a pithy edge to the bold pear and peach fruit. Aged on lees for four months before bottling. 50% in barrels and 50% in stainless steel. Has richness but also freshness. Even with malolactic fermentation this is still fresh with a mineral core to it, and a nice bitter finish, as well as some spiciness. Paradoxical: showing richness but also freshness. Lovely texture. 3000 bottles made. 93/100

La Rosée des Brousses 2018 Languedoc, France
50% Mourvedre, 25% Syrah, 25% Grenache, no sulphites. Orange/pink colour. This is very savoury and mineral with lovely texture. Has some texture with pear, apple, spice and some rosehip syrup and cherry notes, as well as some wax. Lovely weight here with a fresh, grainy finish. Lovely wine. 4000 bottles made. 92/100

Chasseur des Brousses Rouge 2018 Saint-Guilhem-Le Désert, France
No sulphites. So juicy and intense with amazing freshness. Notes of pepper and sweet cherries with some plummy depth. Has nice structure. Very easy and drinkable with lovely presence in the mouth. 92/100

Mas des Brousses Rouge 2017 Terrasses du Larzac, France
Mourvedre (50%), Syrah and Grenache. Some sulphites added because this was barrel aged (400 litres, no new oak). Vivid raspberry and cherry nose with some spiciness. This has a juicy, vivid black cherry and plum palate. Floral, black cherry notes with some nice peppery hints. It’s ripe with some liquorice and garrigue complexity, with a bit of orange peel. Very fine and expressive. Deep but fresh with a grippy finish. 94/100

Mas des Brousses Rouge 2016 Terrasses du Larzac, France
Intense, complex, ripe, rich but balanced, with lovely focus to the spicy blackcherry and blackcurrant fruit. Dry and structural but with some floral overtones and a bit of flesh. Such power and structure here with lovely precision and a taut, crunchy finish. Has lots of impact but stays fresh and detailed. Lovely stuff. 94/100

Mas des Brousses Mataro 2016 Terrases du Larzac, France
70% Mourvedre. Aged in the new barrels after the white has been aged in them. Fresh and vivid with bright, crisp blackberry fruit with some grippy tannins, a bit of tar and pepper, and smoke. Very vivid and expressive with real Mourvedre character. So juicy and grippy with great precision. Such a lovely wine. 94/100 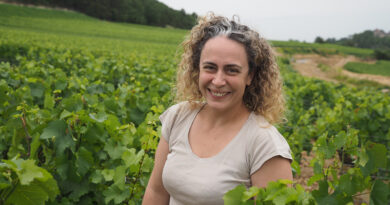 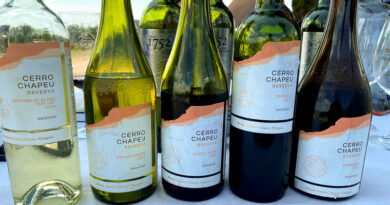 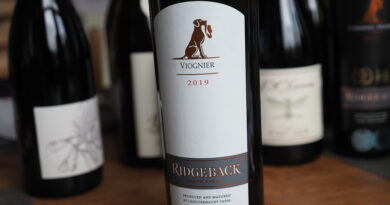