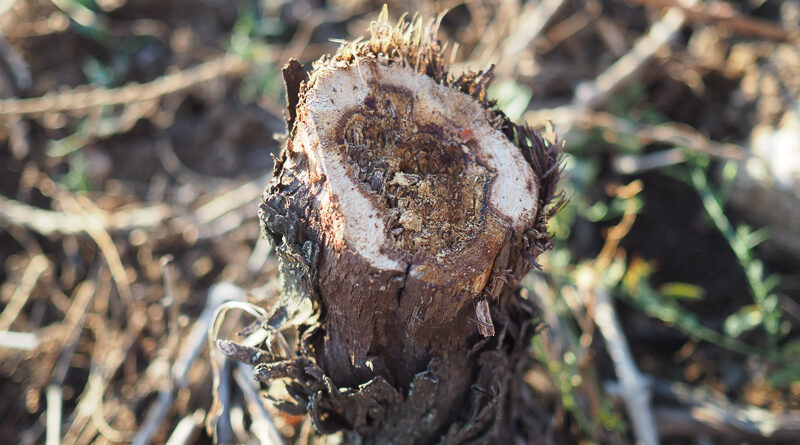 A quick primer on one of the major viticultural challenges worldwide.

1 Trunk diseases are a major problem worldwide. Famed viticulturist Richard Smart likens them to phylloxera in terms of their ability to devastate vineyards (see www.internationalwinechallenge.com/Canopy-Articles/grapevine-trunk-diseases-the-new-phylloxera.html).

2 The term ‘grape vine trunk disease’ is a fairly new one, and was first proposed in the late 1990s by Luigi Chiarappa. One thing they all share in common is that they are diseases of the wood of vines, often accompanied by foliar symptoms, that weaken and eventually kill their hosts. They are found globally, and are a big cause of concern.

3 José-Ramon Úrbez-Torres, based at the Summerland Research and Development Center in Canada’s Okanagan Valley, is one of the leading experts of trunk diseases, and he says that over 130 species from 34 genera are known to be involved in causing these diseases.

4 Although these diseases are thought to be as old as grapevine cultivation itself, the evidence is that they have been on the increase. Why? Úrbez-Torres suggests three reasons. First, since the early 2000s some of the previously effective chemical controls, such as sodium arsenate and benomyl, have been banned. Second, changes in viticultural practice have seen a move to systems with more pruning wounds or bigger pruning wounds. Third, has been a boom in planting/replanting in some areas, and this has put pressure on nurseries. The result? Vineyards have been established with poor quality planting material.

5 There are two distinct types of trunk disease. For young vines, up to 6 years old, there’s Black Foot and Petri Disease, together referred to as ‘young vineyard decline’. These are caused by problems in the nursery: by the time the vines are planted they are already affected.

6 Then there are the die-back diseases affecting more mature vines: Eutypa, Botrosphaeria, Phomopsis and Esca. These diseases are caused by fungi colonizing wound sites, typically resulting from pruning cuts. Each of these trunk diseases is caused by a range of species of fungi, and now sophisticated DNA techniques exist that can identify them very accurately.

7 Some varieties are more susceptible, and Sauvignon Blanc is one of them, which is why the Centre Loire has been a hotspot for research on this problem. Chenin Blanc, Cabernet Sauvignon, Ugni Blanc, Grenache and Syrah are other varieties that are thought to be susceptible, while Semillon, Merlot and Aligoté are less affected.

8 Trunk diseases are on the rise, and the scope of the problem is astonishing: in the Loire it is thought that more than 20% of vines are affected, while in France’s entire vineyard the incidence is estimated to be 13%. A 2001 study put the cost of trunk diseases in California alone at US$260m per year. In Australia, the yield loss in Shiraz from trunk diseases is estimated as A$20 m per year. Globally, the cost of replanting just 1% of the vines worldwide is US$1.5 billion.

9 An extra factor that makes them complicated is that some of the fungi involved belong to a group of fungi called endophytes, that actually live in the plant tissue without causing any harm, and then suddenly switch to being pathogens. So you can find them in the vineyard, but they might not be causing any symptoms of diseases. It could be that some of these problems are initiated by some form of vine stress: then, the previously harmless fungi in the tissue become a problem.

10 Pruning in wet weather is a major risk factor. Úrbez-Torres points out that there are many different alternate hosts such as cherry and apple that can act as a source of inoculum, and the spores from infected wood can spread a long way by wind (some as far as 80 km), or by rain or insects.

11 Úrbez-Torres says that most of these spores are released late autumn to early spring, when it’s wetter. In this case, late pruning can help to diminish infection if you are out of the main period of spore release, but he points out that it isn’t the same in all regions. In the Okanagan, where he is based, the risk period is early spring, then May to June, because of the temperatures. Here, pruning in December gives 50% less infection than pruning in March.

12 François Dal, who works in the centre Loire, has been an advocate of an old, almost forgotten way of pruning called Guyot Poussard, which was first named after its inventor back in the 1920s. Dal has been championing this technique as a way to reduce trunk disease, as have Simonit and Sirch the famous pruning consultants from Italy. The main idea behind this pruning system is protecting the sap route in the vine, which means taking new canes from the outside each time, and so there are pruning wounds only on the upper side of the cordon. The result is fewer and smaller pruning wounds, and less impact on the sap flow.

13 In addition to this form of pruning, it is important to make the pruning cuts in the right places. If you prune too close to the remaining wood, a cone of dessication forms, and it impacts on the sap flow.

14 One way of avoiding trunk disease is by protecting the pruning wounds. Acrylic paint works very well, but there are also products that do a similar job such as Greenseal, Garrison, Gelseal and Baseal. Fungicides can be used to spray the vineyard where treating every vine cut by hand would be too expensive, such as Fluazinam. There’s also biocontrol, such as Vinevax (which is Trichoderma). This can be an excellent protector, but reliability is an issue. Garlic and lactoferrin (a by-product from milk and cheese production) have also been used.

15 Remedial surgery can also work. This normally involves chopping the trunk down to the point where the wedge of dead material is no longer seen. A new trunk then develops. If this is done well, it works, because the established root system helps the vine grow back pretty quickly. In some vineyards this is done prophylactically: even in the absence of signs of trunk disease, a watershoot is allowed to grow up with the intention of this becoming the new trunk. Then the old trunk is cut back. The established root system is retained, and the lack of old wood keeps the vineyard healthy.

16 In Australia, Mark Sosnowski and his colleagues have been working hard on a solution for Eutypa, which is the main problem here. Some of the practical steps that can be effective are not pruning in wet weather, which reduces the chance of fungal spread to pruning wounds, and for vines that have been affected, cutting out the dead material and re-training the vine from shoots below the infected zone. In addition to taking the infected wood, they recommend removing an extra 10 cm of healthy-looking material to make sure the infection is fully removed. 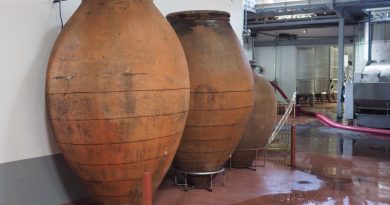 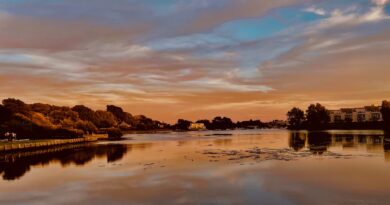 Who is Charlie Herring? The story behind the remarkable wines and ciders of Tim Phillips