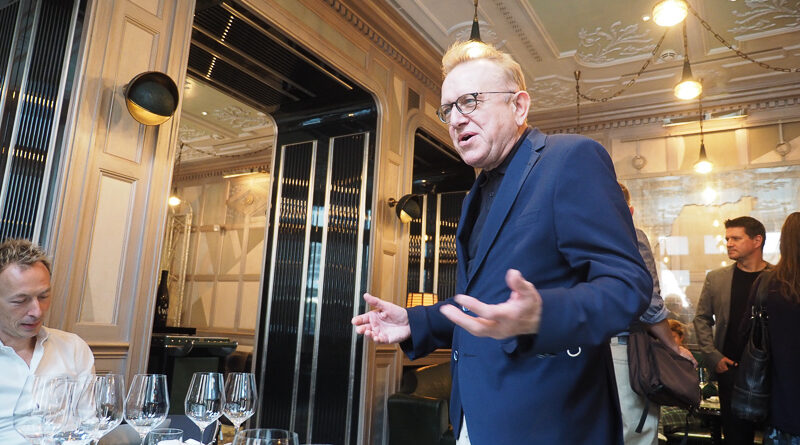 Richard Geoffroy was for a long time the face of Dom Pérignon. But after being associated with this most famous of Champagnes, he left in 2018 to start a new career – not with Champagne, but with sake – the national drink of Japan. While he’s still resident in the Champagne region and has no plans to move to Japan, his heart is very much in this new project, and until Covid’s travel restrictions had spent a lot of time there.

I caught up with him for the London launch of IWA 5 sake.

He describes how he ran into sake early on, during his visits to Japan with Dom Pérignon. ‘If you develop an interest in Japan, you have got to be interested in sake,’ he says. ‘Sake’s identity is the DNA of Japan. Anything with sake is pure, authentic, true Japan. For a long time I was on the consumer’s standpoint of enjoying it. Then I looked at the liquid and saw it could be possibly my signature. If you give me water, I’m pretty sure that I’d start blending water: it’s a compulsive thing. I blend my orange juice at breakfast.’

Geoffroy says that while there are some excellent sakes, the Japanese aren’t the best at selling it abroad. ‘They don’t have a culture of self-promotion,’ he says. ‘There’s a cultural handicap of not self-promoting and selling.’ He says that while sake is appreciated in Japan – it is Nihon-shu, the national drink – it deserves better recognition abroad.

The first element of blending that Geoffroy turned his attention to was blending the right people together for the project. Ryuichiro Masuda of saké brewery Masuda Shuzo is the brewery partner, architect Kengo Kuma is responsible for the new brewery, and designer Marc Newson is responsible for the bottle and label. He also has investors: ‘they are passionate people, not passive at all,’ he says.

The brewery is based in Tateyama in the Toyama Prefecture. ‘We went to a lesser-known part of Japan,’ says Geoffroy. ‘It’s rural and pastoral, connected to nature.’

Geoffroy’s approach to sake comes from his compulsion to blend things. ‘Assemblage is the answer,’ he says. ‘The name of the game in assemblage is balance and complexity. Balance is a magical thing, allowing richness, intensity and substance to levitate.’ He says that what he’s looking for in IWA is his goal for Champagne: drinkability, flow and glide. The transition from front to finish, ending up with something lingering enough.

‘My number one goal is resetting the equilibrium of the nose and the palate,’ he says. ‘Traditional high-end sakes are way more nose than palate. Whenever people dislike sake it is because of the aftertaste: it can be abrupt. It can have an unpleasant sensation of heat and the bitterness can be disjointed, leaving something that is not memorable.’

‘My aim is to make the finish long enough,’ says Geoffroy. ‘It doesn’t have to be exaggerated.’

He says that there is a risk that what he us doing with IWA might be seen as a provocation by some of the more traditional influences in the sake scene. But he’s been thrilled by the overall reception of the first release, which was in May 2020. ‘People are telling me that they are experiencing a new sensation,’ says Geoffroy. ‘Many people on social media are saying, at last, a gaijin comes in and stirs the pot!’ The second release was in May 2021, and the third release is now bottled – IWA spends a year in bottle before release.

In keeping with the blending story, Geoffroy has used three different types of sake rice –  Yamadanishiki, Omachi (he says he can taste the influence of this rice blind) and Gohyakumangoku – from four different sources, and has used different motos (yeast starters) and five different yeast strains. The rice is polished to a ratio of 35% (65% is ground away, leaving just the shinpako, the pure starch core of the grain).

Geoffroy is in awe about the complexity of making great sake. ‘At Dom Pérignon, I thought Champagne making was the most complex process in wine, but I think sake beats it.’ He says that there is a lot of complicated microbiology, and good brewers have a lot of experience. ‘You couldn’t do it out of a book,’ he says. ‘There are so many variables. It is an option game.’ He concludes, ‘we will keep experimenting for ever.’

IWA 5 (May 2020 release)
Very pale in colour, this has a refined nose that’s taut and delicate with a subtle nuttiness. The palate has nice presence with some green hints and pear and canteloup melon notes, with freshness and a slight spicy detail on the finish. This is delicate and pure and tapers nicely on the finish. Subtle honey, nuts and spice. 93/100

IWA 5 (May 2021 release)
Fine delicate nose with some pear and fine mealy hints. Fresh and fruity. Lovely concentration and freshness on the palate with fine spicy characters adding complexity, and nice texture and harmony. Everything pulls in the same direction: there is lovely texture and freshness. 95/100 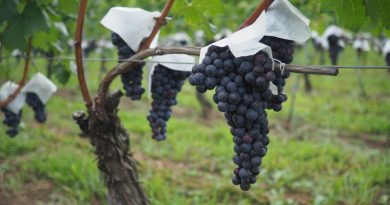 Video: in the vineyards of Château Mercian, Japan 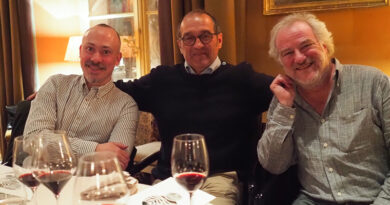 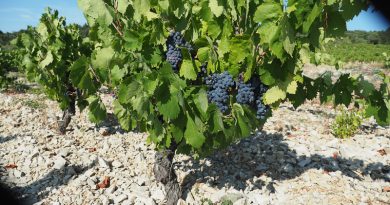