Back in 2016 Gerard Bertrand purchased a beautiful estate in the rolling hills of the Haut Cabrières, and from the 12 best hectares of vines on the property, decided to focus on making the best rosé possible. Soils here are a mix of friable schist and also some limestone from the surrounding hills, and farming is biodynamic. After two years of experiments, the first vintage released was 2018. Cinsault and Grenache form the basis of the wine, along with Syrah and Mourvèdre, as well as a touch of Viognier. A new cellar was built for the 2021 vintage, designed by Gerard working with Montpellier architect François Fontès, and it’s quite remarkable. With a living roof, it is built into the side of the hill, and the fermenters are enclosed in pyramids. With group technical director Guillaume Barraud and Clos du Temple winemaker Benjamin Gadois, we tasted through the four vintages released so far. This is the world’s most expensive rosé, but it’s not just a gimmick: this is a serious, ageworthy wine with real texture and depth. The 2021 is my favourite, just, but Benjamin is very excited by the as-yet unblended 2022. 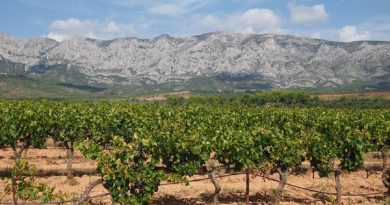