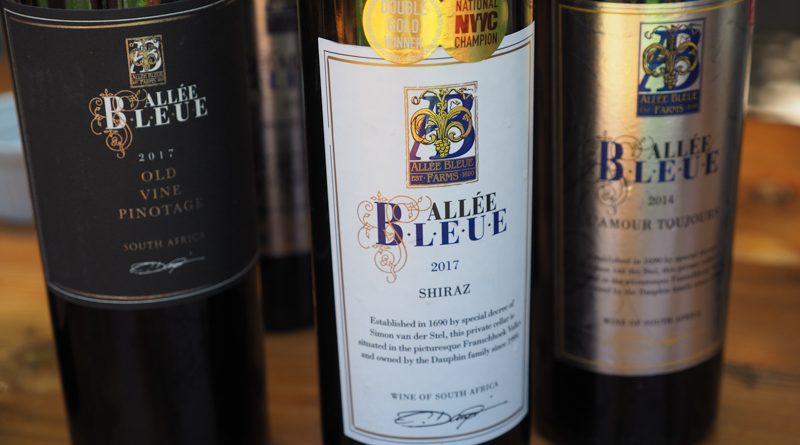 Head towards Franschhoek from Stellenbosch on the R310 over the Helshgoote pass, and you’ll hit the R45. The Franschhoek wine region starts here, and opposite you is the Allée Bleu farm, which just falls within Franschhoek’s somewhat extended boundaries.

It’s a sizeable property, just under 300 hectares, but the vast majority of this is still a fruit farm. As well as grapes, they grow citrus and persimmon, nectarines and watermelon. They are also one of the biggest producers of fresh-cut hydroponically grown herbs in the Western Cape. Allée Bleue is owned by Germany’s Dauphin family who made their money selling office furniture.

‘I believe in terroir by truck,’ says Van Zyl. ‘I don’t have a problem with that, if it is managed correctly, and I’ve been working with most of my suppliers since day one.’ The cellar has a 600 ton capacity, and as the owners want him to make the most of their assets, there’s also some custom crush: Donovan Rall, Ian Naudé, Kruger Family Wines, and others make wine in the cellar too. ‘As a winemaker you must always be kept on your toes,’ he says ‘Working with those guys – their way of winemaking is different from mine. You learn a lot from their mistakes. You tell them that you did it [their way], but you did it the old school way!’ he jokes.

‘I run a very different way of custom crushing. I was with Donovan for three hours this morning to plan his harvest. Once the grapes are dropped off in the cellar I know exactly what my clients want me to do. They are there to taste and look and see, but the day to day running of the cellar is my thing.’

He thinks that the diversity of Franschhoek, coupled with the lack of agreement among winemakers, makes it difficult to say what the best variety for the region is. ‘We have the Semillon guys in Franschhoek saying that Semillon is the best. But there is only X amount of old blocks, so what are the others supposed to do? That’s why you have some of us punting the Chardonnay train which is a better train to be on because it is more inclusive,’ he says. ‘Then you have got the guys up in the mountains saying Cabernet Sauvignon and Cabernet Franc are the best. And then the guys down in the valley floor saying Shiraz, Shiraz, Shiraz. These are the four that we are running with at this stage, but you can’t tell me in the valley floor that I’m not supposed to make Chardonnay and Shiraz, I don’t need your permission. And you can’t tell the guys up in the mountains, no Cabernet Franc or Cabernet Sauvignon. This is always going to be controversial. Our wine industry is diverse: we are never going to be like the Rhone or Burgundy where we only do one thing.’

‘I like wood,’ says Van Zyl. ‘It is part of my old school regime. I like the smaller forests. I like the ward in the ward. I want the small forest in the forest. This also adds uniqueness. Wine needs tannin, it is part of the anti-oxidant in the wine. I need the manicured wood tannin to help protect my wine. Managing and understanding this takes years of experience.’

When Van Zyl started making Chenin there were largely two styles on the market: fresh fruity crowd pleasers and big bold, wooded Chenins back blended with noble late harvest. He wanted to do something in between, and started working with co-appellations. It’s half Walker Bay (the Stanford end, which is warmer) and half Franschhoek.

Allée Bleue Chenin Blanc 2019 WO Franschhoek/Walker Bay
Barrel fermented, but in an unusual way. The first 10 balling is fermented in tank so the fermentation is half way by the time it goes to barrel, so the temperatures don’t peak too high (they peak at 18/19 C). Have about 45 400 liter barrels, the oldest is 2008 and still good. They buy one or two new ones each year. All 400 litre barrels. Bright and juicy with nice ripe pear fruit with some spiciness and a bit of citrus peel detail. Fruity and quite textural, with a hint of seriousness. Could develop nicely. (R100) 89/100 (JG)

Positively under screwcap. Tropical passionfruit, orange, and ample white pepper, lead, while a concentrated nougat and citrus take the middle through to a snappy finish. Half the ferment started in tank, but all finished in barrel for 6 moths. 89/100 (TR)

‘I’m a bit more old school and traditional in the way I make wine,’ says Van Zyl ‘but sometimes it’s still nice to play around.’ In 2017 he had 17 000 litres of Walker Bay Sauvignon Blanc fermenting. ‘I can play with this,’ he said. So he started filling up older barrels, then an egg, and an amphora, and a tank. The mother fermentation batch was the same, so these were all filled with same juice. Between the egg and the tank there wasn’t a lot of difference. The old barrels were lovely. The amphora was completely different. Just 380 litres made: to put it back into the blend would have been blasphemy, so he bottled it separately in magnum. ‘Sometimes we work a bit too reductively with Sauvignon,’ he says.

The Black Series Amphora Sauvignon Blanc 2017 Walker Bay (magnum)
Not released yet, and only bottled in magnum, unfiltered. Very textural with fresh citrus, grapefruit, blackcurrant and good texture with subtle toast, spice, minerals and a twist of salt. This is such an interesting wine. 92/100 (JG)

A new release, from a happy amphora experiment, this Sauvignon Blanc is bottled only in mags. Quite textural and layered, with lemon, white asperagus, and ample lovely stony salts threaded throughout. 92/100 (TR)

The Black Series Chardonnay 2014 Banghoek, Stellenbosch (magnum)
This comes from the block that Jackson Family are using now to make Capensis: they bought the farm at the beginning of 2015. He started working with this block when he was at Simonsig. It is a barrel selection of the two best barrels (one was new), then spends another two years in used (fifth fill) barrels with the lees. ‘I wanted that marzipan, old school Chardonnay flavour to develop in the barrel,’ says Van Zyl.

‘I think Chardonnay is beautiful,’ says Van Zyl. ‘People love Chardonnay. There is a market for it and South Africa makes world class Chardonnay.’

This is bold and rich with depth and also freshness. This is spicy and bold with honey, fennel, citrus and cashew. Rounded and harmonious with some lovely textural characters. Oatmeal and honey on the finish. (R1000 for a magnum). 93/100 (JG)

From Banghoek, and now fully owned by the Jackson Family for their luxury Capensis. Only magnums were produced. Deep yellow in hue, with lovely earthy reductive broodiness, earth, match stick, wax, meringue, and large flak salts ruling the full-boded frame. Someone overwhelming at this stage in evolution. 50% was done in new wood. 91/100 (TR)

L’Amour Toujours 2014 Banghoek, Stellenbosch
A Cabernet Franc-dominated Bordeaux blend. 55% new oak. Fresh and pure with lovely grippy structure under the blackcurrant and berry fruits. Has a hint of mint and some tar and spice. Grippy and dense, and quite serious. (R250) 92/100 (JG)

Potent kirsch, drives this dense, peppery Cabernet Franc dominated blend, one that saw 55% new wood for 20 months. Tannins are tight and grippy, framing dark cherry and herbal scrub. Long in the mouth, in a severe and rigid way now. 91/100 (TR)

L’Amour Toujours 2015 Banghoek, Stellenbosch
Supple and sweet with nice spicy complexity and some wild herb hints. Concentrated with some red fruit character as well as blackcurrant and spice. Has a lovely savoury quality, with good texture as well as grippy tannins on the finish. (R250) 93/100 (JG)

Wild cherry dominates this tight, firm, grippy, palate, with a noted savoury spiciness and expansiveness on the palate that counters the rigid structure. Winemaker Van Zyl prefers Stellenbosch for Cabernet Franc, as Franschhoek’s sandy valley floors do not work with the grape, to his tastes. 91/100 (TR)

Allée Bleue Shiraz 2017 Franschhoek
From the lemon grove block which has now been registered as a single vineyard. This has lovely concentration and depth. There’s some peppery freshness with nice structure and sweet black cherries and spice. The oak is really well integrated with lovely intensity and grippy structure. It’s structured, but there’s also freshness and some complex wild herb notes. Has high acidity. (R180) 93/100 (JG)

Allée Bleue Pinotage 2017 Franschhoek/Piekeneerskloof
Has a slight earthy quality with a twist of beetroot underneath the elegant red berry and cherry fruit. Supple and expressive with good acidity and nice fresh cherry fruit. Nice brightness and some grip on the finish. Lovely juicy red fruits. (R225) 91/100 (JG)

Very herbal and tight, with a green, sappy edge framing raspberry and light spicing. Wood is evident, but swallowed up by the fruit. Nice freshness throughout. 89/100 (TR)

From very tall old vines on the striking Piekeneerskloof farm. This is driven with wild herbal and twine notes, on a tight, green, peppery palate. There’s a slightly sour edge to the fruit. Ready for drinking. 91/100 (TR)

Allée Bleue The Black Series Old Vine Pinotage 2018 Piekeneerskloof
Rich, ripe and dense with a spicy savouriness under the black cherry and blackberry fruit. Some smoky oak under the fruit. Shows a lovely elegance and purity, and needs some time to come together, but it’s pretty spectacular. 95/100 (JG)

Super full, ripe, and round with supple black fruit that floods an expansive palate. Lightly smokey, spicy wood props up the whole. This is a giant of a classic Pinotage. 90/100 (TR) 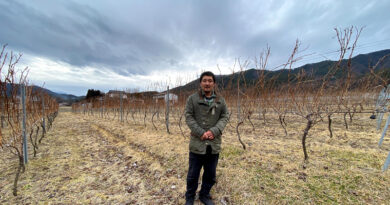 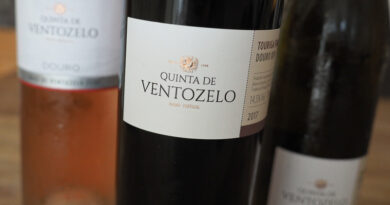 The wines of Quinta do Ventozelo, Douro, Portugal 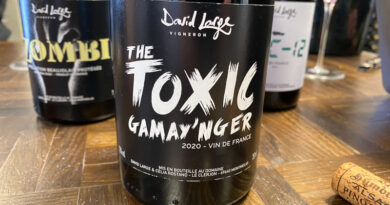 The wines of David Large, Beaujolais