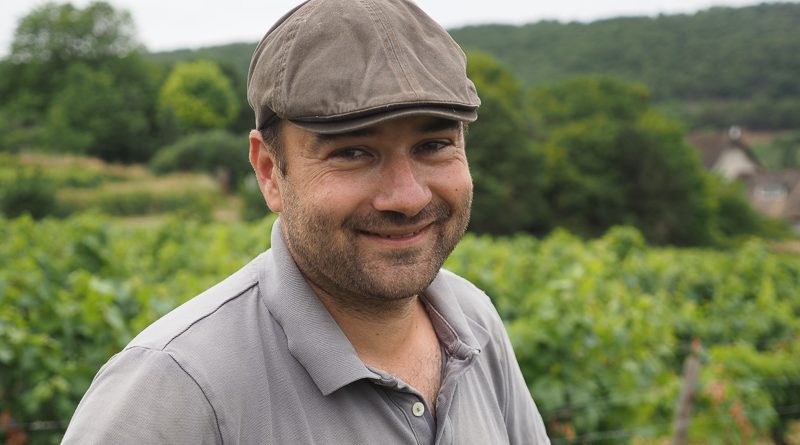 Jamie Goode visits Xavier Moissenet, who’s making some amazing Aligoté in Bouzeron – Bourgogne’s appellation devoted to the grape. He thinks it could be important in the future of the region.

The next stop in my explorations in Bourgogne was to the village of Bouzeron, to visit Les Champs de Thémis. This is the domaine of Xavier Moissenet (pictured above), who started as a winegrower in 2014.

Bouzeron is unique in that it’s the only appellation in Bourgogne that is devoted to Aligoté, which is a grape I’m really interested in at the moment. I’m not the only one: there is an organization, Les Aligoteurs, devoted to the variety, which has a membership of 50 domaines now. Bouzeron is exclusively Aligoté, and there are 60 hectares. There are another 20 hectares of vines in the village, but these aren’t Aligoté and so wines made from them are labelled Bourgogne Côte Chalonnaise.

Aligoté is an ancient grape that accounts for 6% of the vineyard area of Bourgogne. Its parents are Pinot Noir and Gouais Blanc, a ‘founder’ grape variety that has been a parent of many varieties. This exact combination, with Gouais Blanc as the mother and Pinot Noir has the father, has resulted in a roll call of some important varieties: Aligoté, Auxerrois, Bachet, Chardonnay, Franc noir, Gamay noir, Melon, Romorantin and Sacy. (The role of mother is slightly more important in grape breeding because the mitochondrial and chloroplast DNA is inherited directly from the mother, and some of these genes affect agronomically important traits.)

Moissenet used to be a lawyer. He was assistant to the public prosecutor in Chalon-sur-Saone. He changed career in 2014 at the age of 38, and now farms 4.5 hectares of vines organically. His family come from Nuits-Saint-George and had lots of vines before phylloxera struck. After a century, he’s reviving the family traditions.

‘Wine is in my blood,’ says Moissenet. ‘I finished my law studies with a diploma in wine and wine law. After 10 years of tribunals, the wine called me.’

He was looking for some vines for a few years. ‘People here called me and said, I want to stop: do you want to continue?’ So he rents his vines in Bouzeron, and has bought 1.5 hectares in Mercurey, with the help of some family investors.

He farms everything organically and has been trialling biodynamics on two parcels (1 hectare). ‘I think it is a good thing but I need to trial it to see if I can do it,’ he says. He works alone for most of the year. Moissenet says that organics is the future. ‘But there is a lot of resistance,’ he adds. ‘People are really against it, especially in Mercurey. It is difficult: we put some signs explaining organic farming in the vineyard and some got ripped out.’ Mercurey has 700 hectares, but there are only five or six producers doing organics. Ten years ago, he says, customers didn’t ask about what was being done in the vineyard, but now they do.

In the vineyard we look at the old vines in a plot called Les Corcelles, which are now 80 years old. There’s a younger plot that’s 60 years old, but he sells these grapes.

‘Aligoté is part of the future of Burgundy,’ says Moissenet. ‘If we can select good [vine material] and plant it in good terroirs, it can make good wines with freshness and minerality. This is what customers are looking for when they come to Burgundy.’ He adds that, ‘with global warming it is hard for Chardonnay to keep its acidity, but Aligoté always keeps its freshness and acidity.’

Winemaking is pretty natural, with wild yeasts. ‘I’m not a good customer for the product people,’ he says.

Les Champs de Themis Bouzeron Les Clous 2017 Bourgogne
A sunny plot, looking east. Interesting soils with fossils and quartz. The vines are around 40 years old (Moissenet describes them as young-ish), and this wine is made and aged in stainless steel. Intense, pure, vivid and mineral with good acidity. Has some pear and citrus notes, as well as subtle nutty notes. Lovely purity with a nice acid line on the finish. 92/100

Les Champs de Themis Bouzeron Les Corcelles 2017 Bourgogne
80 year old vines. This is aged in five barrels, three of 300 litres and two of 500 litres – none new. Ripe pear, peach and apricot notes with honey, nuts and spice. Linear acidity, but also lovely depth and complexity. Very expressive and rounded but with nice framing from spice and acid. Such precision. 94/100

Les Champs de Themis Les Corcelles 2016 Bourgogne
Subtle nut and honey richness here with ripe pear and apple fruit. This has lovely depth and harmony with a hint of herb and cabbage. Refined and detailed. Quite rich with a slight cabbage hint. 92/100

Les Champs de Themis Les Corcelles 2014 Bourgogne
This is the debut vintage. Mineral, matchstick nose. Astonishingly fresh, mineral palate with many dimensions of flavour. Pure, fine and mineral. This is developing so nicely. 94/100 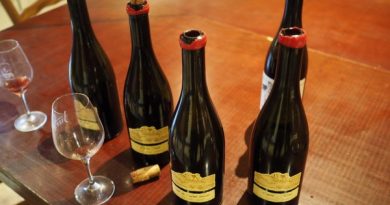 Visiting Ganevat in the Jura: a sort of pilgrimage 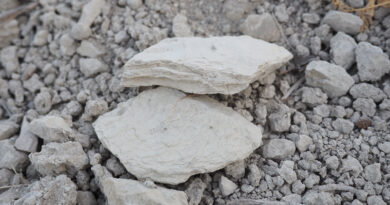 Video: visiting Willy Perez, who is on a mission to capture the great Sherry wines of the past 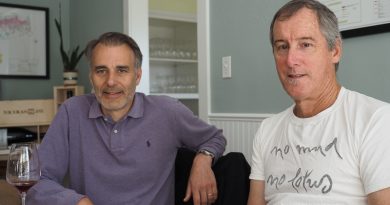