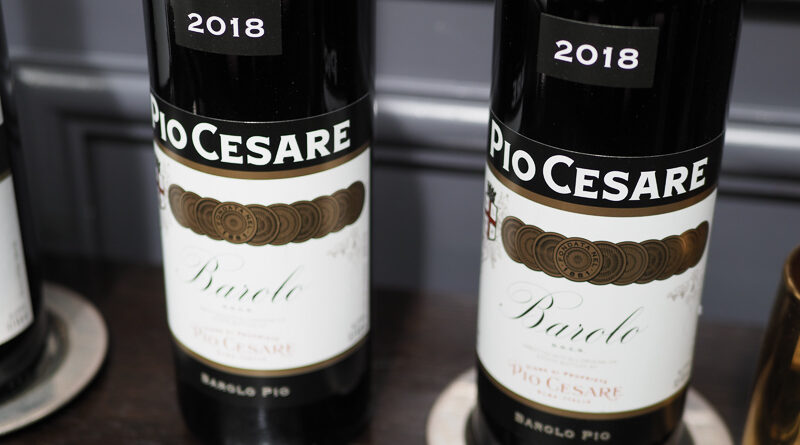 Pio Cesare is a well known name in Barolo and Barbaresco. With annual production in the range of 400 000 bottles from 75 hectares of vineyards, this makes them a big player in the context of Piemonte. But despite the size, their focus is on high-end wines. Last year they celebrated their 140th anniversary.

In April 2021 long-term proprietor Pio Boffa died. Pio had been involved in the family firm since 1973 (he was the fourth generation of the family) had run things since the death of his father Guiseppe Boffa in 2000. Now Pio Cesare is in the hands of the fifth generation: Pio’s daughter Federica Boffa, and her cousin Cesare Benvenuto, Pio’s nephew.

Cesare was in town to present the 2018 vintage, and I caught up with him over lunch. We began with a pair of Chardonnays, which is a little surprising for Piemonte.

‘Chardonnay is also part of our history, even if it is not an indigenous grape variety of Langhe, says Cesare. ‘We started to plant Chardonnay in the early 1980s, when no one used to know the name Chardonnay in our region. We planted a vineyard inside the Barbaresco region at Il Bricco. It was a sort of sacrilege.’

At the time, white wines weren’t highly revered in Piemonte. It was Cesare’s uncle, Pio Boffa, who made the decision after spending two harvests with Robert Mondavi in California. ‘By the 1970s barrel-fermented Chardonnay was really moving,’ says Cesare. ‘He came back home and tried to convince his father, who was a stubborn Piemontese engineer. After a few years he succeeded.

But oaked Chardonnay didn’t go down well with the locals. ‘All the Italian clients and restaurants bought this wine but they sent back the bottles saying that they were corked. The palate of the Italian market was not ready for a barrel-fermented Chardonnay: they confused the taste of oak with the barrel taste.’

‘My grandfather and uncle decided to make a fresher version of Chardonnay called L’Altro, Which is very fresh and fruity.’

This is the younger brother of the single vineyard Chardonnay, which is called Piodilei. ‘It means Pio Cesare for the ladies,’ says Cesare. ‘It was dedicated to the ladies of our family because they were curious of this wine and kept going to the cellar.’

Vineyard acquisition has been part of the Pio Cesare strategy. ‘50 years ago we began a long process of vineyard acquisition,’ says Cesare. ‘The first vineyard my grandfather bought was in 1972. It’s in Barbaresco and it’s called Il Bricco. Then, step by step, we were able to acquire vineyards and we now have 75 hectares in Barbaresco and Barolo.’

But how often do suitable vineyards come up for sale? ‘Now it is almost impossible to buy top vineyards,’ says Cesare. ‘There are always vineyards for sale: for example someone called me this morning offering me a vineyard, but it was not a good business. We don’t buy vineyards just to increase quantity and make more money. We like to have top quality. We prefer to have less, but to have top quality.’

With climate chaos and warming trends, has the region benefitted at all? I recently spoke to a proprietor from the region who said their wines were now better: they won’t last 50 years but there has been some benefit from a slight warming trend. ‘Who now has the patience to wait 50 years?’ replies Cesare. ‘The global warming is something I don’t like, but for the Nebbiolo grape it is really very helpful. Nebbiolo needs sun and warm temperatures.’

Pio Cesare turned 100 in 1981. And then they celebrated with Barolo 1974. ‘In the 1970s and early 1980s Barolo and Barbaresco used to be aged for seven or eight years in the same cask, without racking the wine,’ says Cesare. ‘It was almost slightly oxidised. But when I taste a bottle from the 1960s and early 1970s I like the taste. It is normal to taste this slight oxidation.’

‘When my great great grandfather started to make wine in 1881, he was an entrepreneur of Alba who had four or five different businesses, including wine for his friends. This was his favourite business, and he dedicated himself and his family to make Barolo and Barbaresco.’

He recently tasted a 1961 that was made by his grandfather, and engineer. There was no winemaker. ‘Now if you don’t have five winemakers, three consultants and eight agronomists you are nobody! The introduction of the barrique was a big evolution. We started step by step to age Barolo less in big casks and with the addition of barriques. All the new producers in the middle of the 1980s came on board. There was a reduction in the time in oak needed from seven or eight years to three years, to have a more dynamic Barolo.’

‘My mum is 76. She’s not involved in the wine business but she drinks a lot. For her, Barolo is the wine that you only drink at Christmas. This was the mentality of the people born in the 1940s and 1950s.’

‘90% of the volume we put in the big casks, and 10% is in second year barriques. Then at 30 months we blend them together in another big cask or cement, and then bottle.

In 2008 they approached well known wine consultant, the late Denis Dourbodieu. ‘He was not very happy to meet us,’ Cesare jokes. ‘My uncle introduced Pio Cesare to him, and he said, so what do you want from me? I don’t know anything about Nebbiolo. My uncle answered: you don’t know anything about Nebbiolo? This is what we want. We don’t want somebody coming to Pio Cesare and teaching us how to make Barolo after 100 years. But we wanted to have a smart person to open up our minds. The first wine he took under his umbrella was the Chardonnay.’

Pio Cesare Barbaresco 2018 Piemonte, Italy
Aromatic and expressive with lovely red cherry and raspberry fruit. Very expressive with nice tannins and these melt into the juicy red fruits, with a nice savouriness. Some tea notes and lovely cherry and plum fruit. Has freshness and poise. 94/100

Pio Cesare Barolo 2018 Piemonte, Italy
30 months oak ageing with 90% in big botti and 10 in small oak. Some sappy hints here, and notes of iodine, blood, raspberries and cherries. Juicy but rounded with a seductive quality as well as a nice freshness. There’s a spicy, green hint to the red cherry fruit. Very fine. 94/100

Pio Cesare Barolo Ornato 2018 Piemonte, Italy
This was the first estate they acquired in Barolo back in 1979, and the first vintage of this was 1985. Lovely density here with concentrated compact red cherry and raspberry fruit. Rounded with nice texture and good structure underneath the dense sweet fruit. Serious. 95/100

Pio Cesare Barolo Mosconi 2018 Piemonte, Italy
In Monforte d’Alba. Fresh and detailed with lovely purity and nice grainy tannin. Fine with tapered structure and red cherries and plums. Some roundness in the mouth with a hint of pepper. This has a real sense of elegance, finesse and purity. There’s some generosity and nice ripeness. The structure is hidden by the fruit at the moment. 96/100

Pio Cesare Barolo Chinato
Made with the Barolo 2015 (75%) macerated with different herbs including quinine. Supposed to be drunk at the end of the meal as a digestive. Sweet and spicy and really intense with some medicine notes as well as complex herbs. Very stylish. 8/10 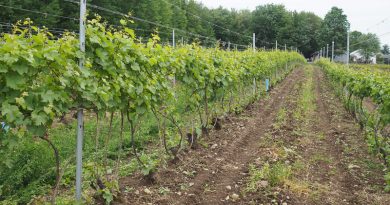 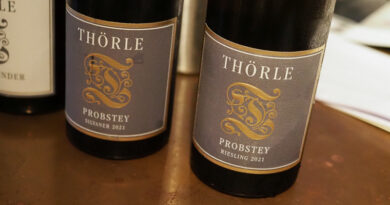 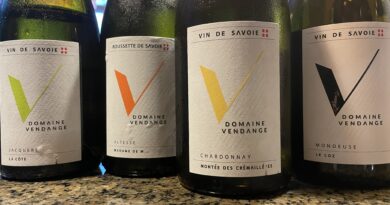